Friday, 4th of December 2015
1. INTRODUCTION
In the beginning of the first partners’ meeting each partner introduced her/himself and the organisations they represent.

2. CONTRACTS
The issue of partners’ agreement were addressed. All partners are to get the contract contents confirmation of their representatives and send to PSOUU information. Latvia organisation left in PSOUU signed copies.

3. SURVEY – RESOURCES REVIEW
Meeting participants agreed, that to make future survey better and more reliable we should:
write down and publish how many resources have we checked,
check only documents created in and after 2010 year.

4. SURVEY – MEDIA CAMPAIGN
Partners started to discuss on questions that will be asked during media campaign. The first proposition of questions was prepared by the Czech team before the meeting.

After meeting partners had a dinner together in restaurant Bagatela, Bagatela 12 street.
Saturday, 5th of December 2015 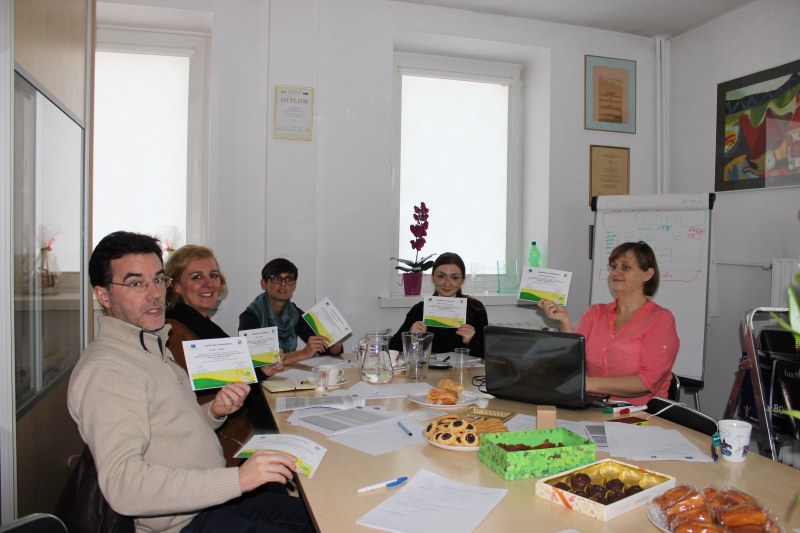 List of questions to be asked to persons supporting people with intellectual disability:

1. Which kind of situations working with computer or mobile eq. are dangerous? Are there dangers specific for persons with ID? If You think so, plz decribe.

2. Do you know someone with intellectual disability who is/was a victim of cyberbulling (violence on internet, stalking)?

3. What are the principles safety rules when you work with computer or internet??

4. Which information is for you so private that you will never publish them on internet?

5. What do persons with ID search on internet, especially social media?

6. To whom could You speak if You have any doubts or problems while using internet and computer?
Additionally:
1. What kind of behave of other internet users is potentially risky?
Can you describe it?

2. Do You use any programs that protect computer user, eg. parent control type?
3. Do you buy online goods with credit card or for instalment?

2. Which information is for you so private that you will never publish them on internet?

3. What do persons with ID search on internet, especially social media?

4. What kind of behave of other internet users is potentially risky?
Can you describe it?

5. To whom could You speak if You have any doubts or problems while using internet and computer?
Questions addressed to persons with intellectual disability should be in form of easy to read text.

2. SURVEY – MEDIA CAMPAIGN – OTHER ISSUES
questions can be also asked in form of survey sent to concerned persons and organisations.
Meetings should be organised
on Facebook – depend on country – one, two questions at once every second day or all at once or other solution
first post NO LATER than 11th of January, the end 31st of January
in all activities should be involved minimum 30 persons per country.

The Polish Association for Persons with Intellectual Disability

The Polytechnic Institute of Santarém

The project is co-financed within Erasmus+ program KA2 Strategic partnership. The information and views set out in the project materials are those of the authors and do not necessarily reflect the official opinion of the European Commission.
Powered by WordPress © 2016. All Rights Reserved by webriti